The company Zemiata was created in 2017 to promote and gather under the same name the work of two choreographers, Youri De Gussem (BE) and Julie Querre (FR).

This collaboration started in 2014 by assisting each other on different choreographic projects and by creating the duet Undeux for the festival From Three Two Four at the theater Cité Culture in Brussels. Since 2016, we have collaborated on Zemiata, first group piece of the choreographer Youri De Gussem, which premiered in Belgium in January 2017 and performed several dates in Greece, France, Danemark and Holland.

For more information about the company. 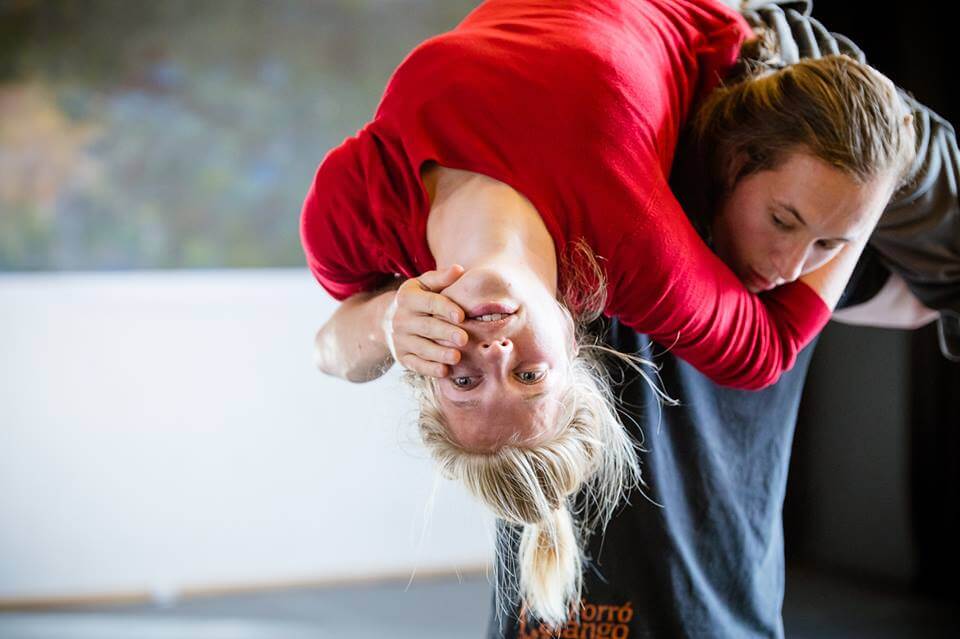 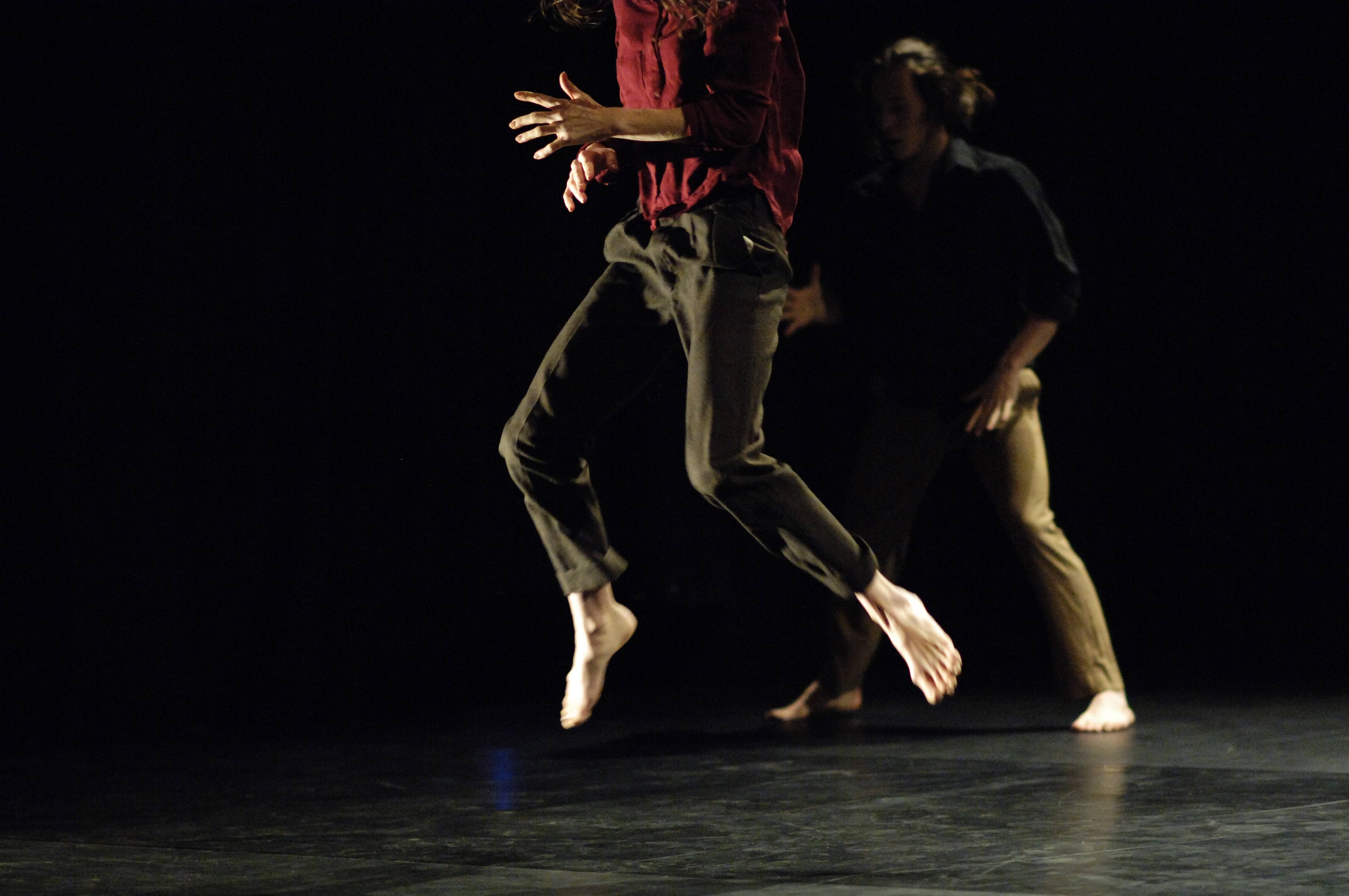 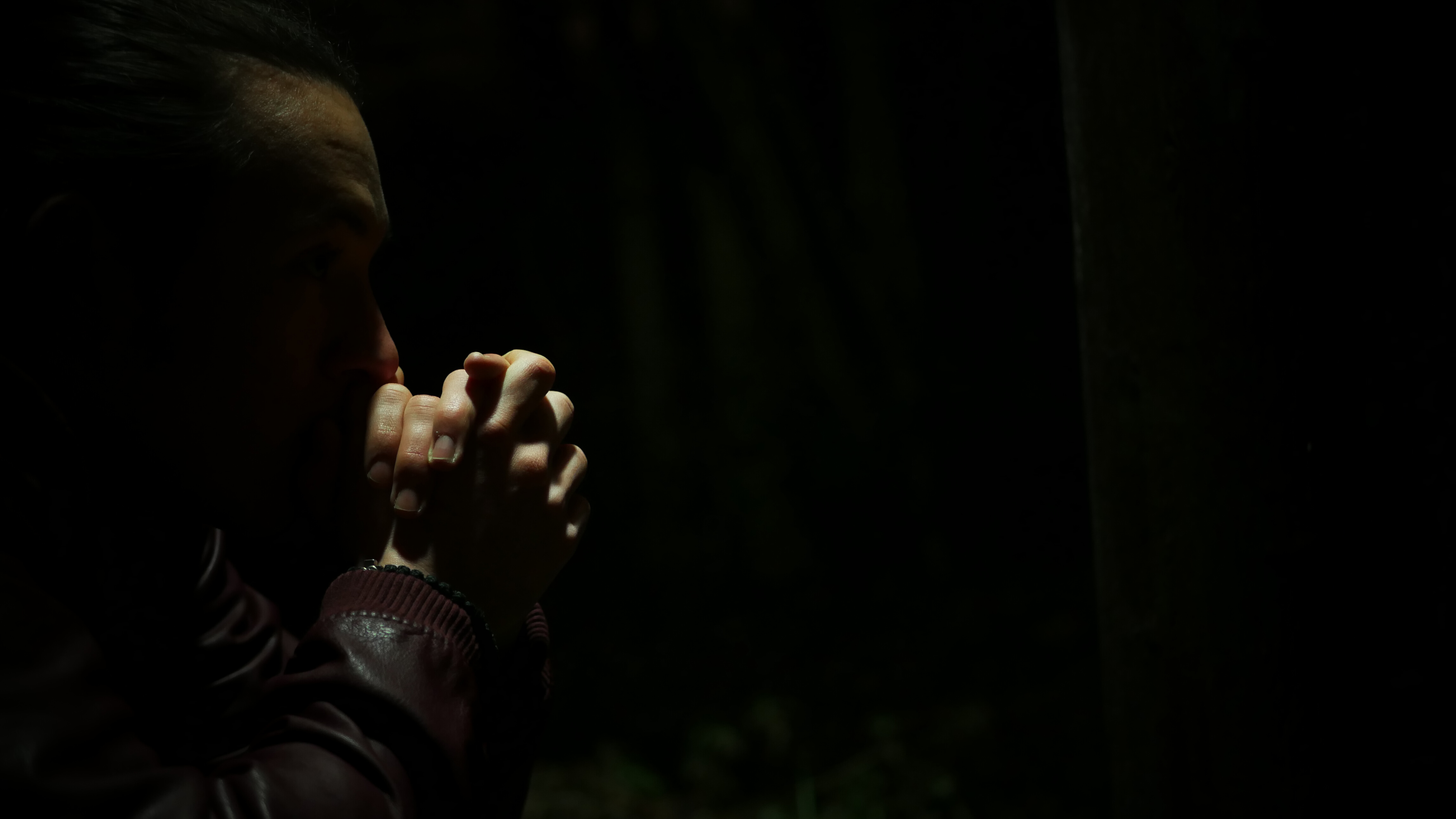 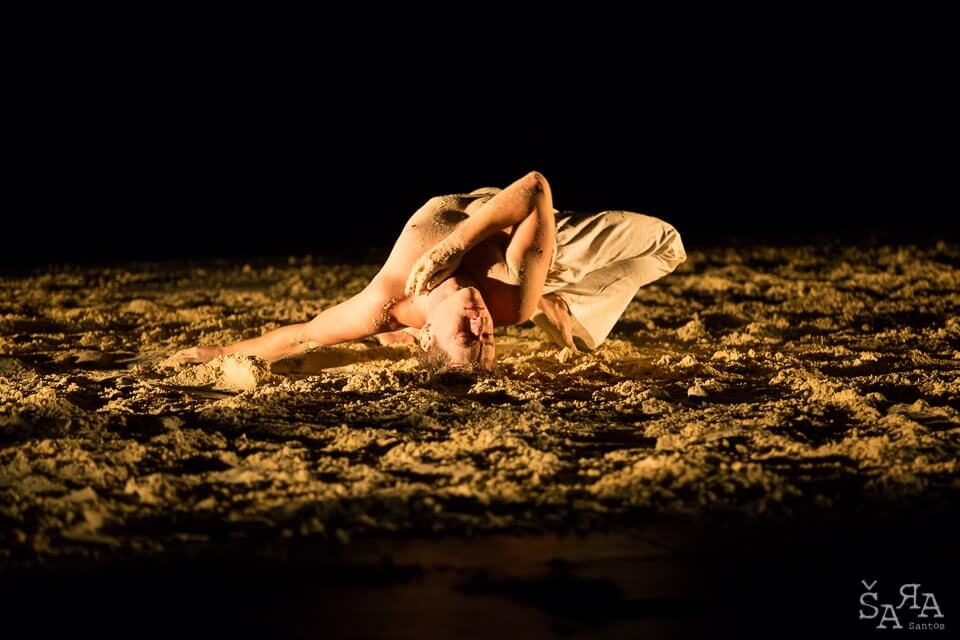 Un 2 (translation: A Two/One Two) is a duet about the relationship between two persons. It is about love, friendship, passion, deception, doubt, incomprehension and love again. It is a research of an individuality within a couple and of an individual need of collectivity. 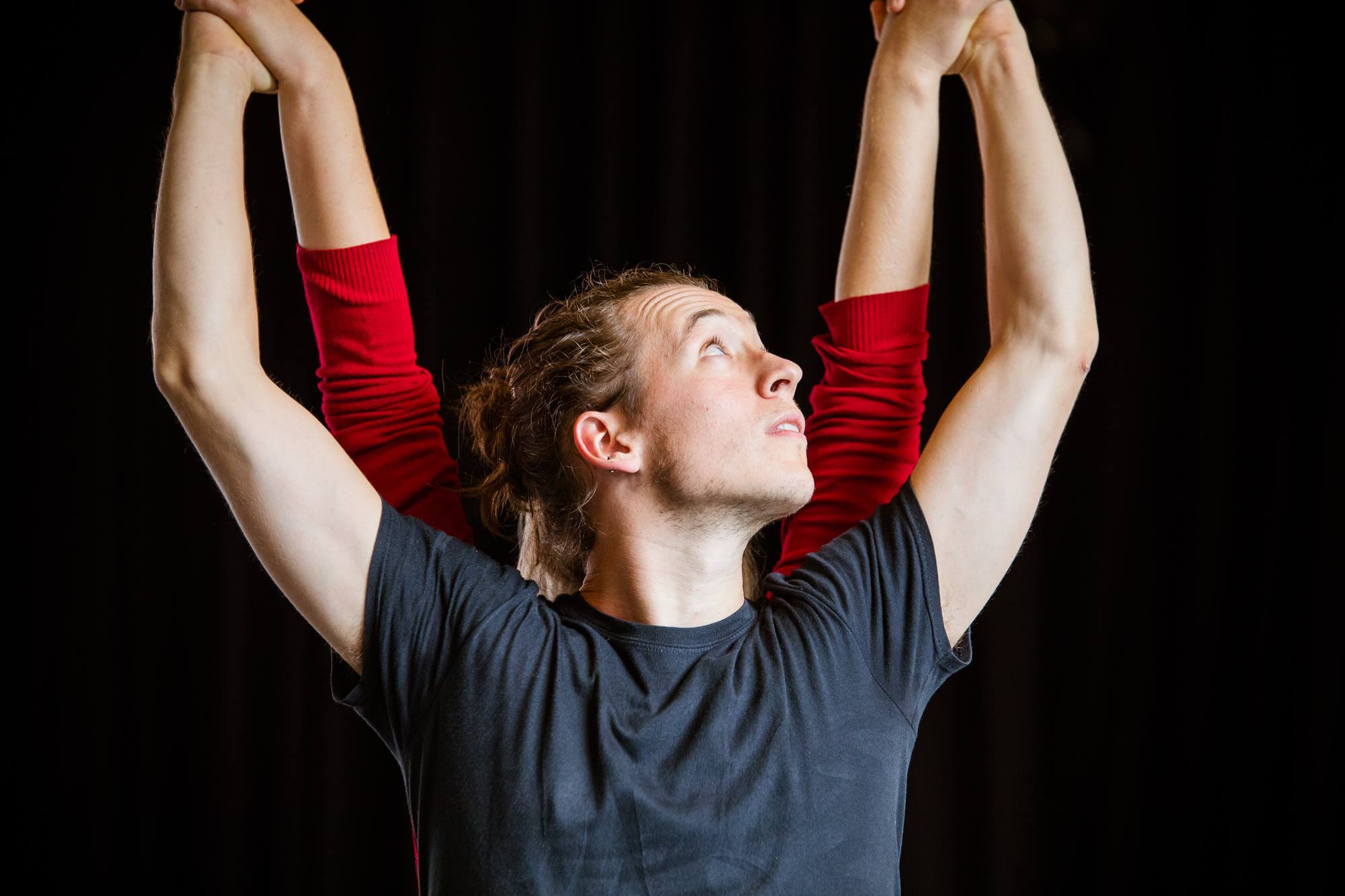 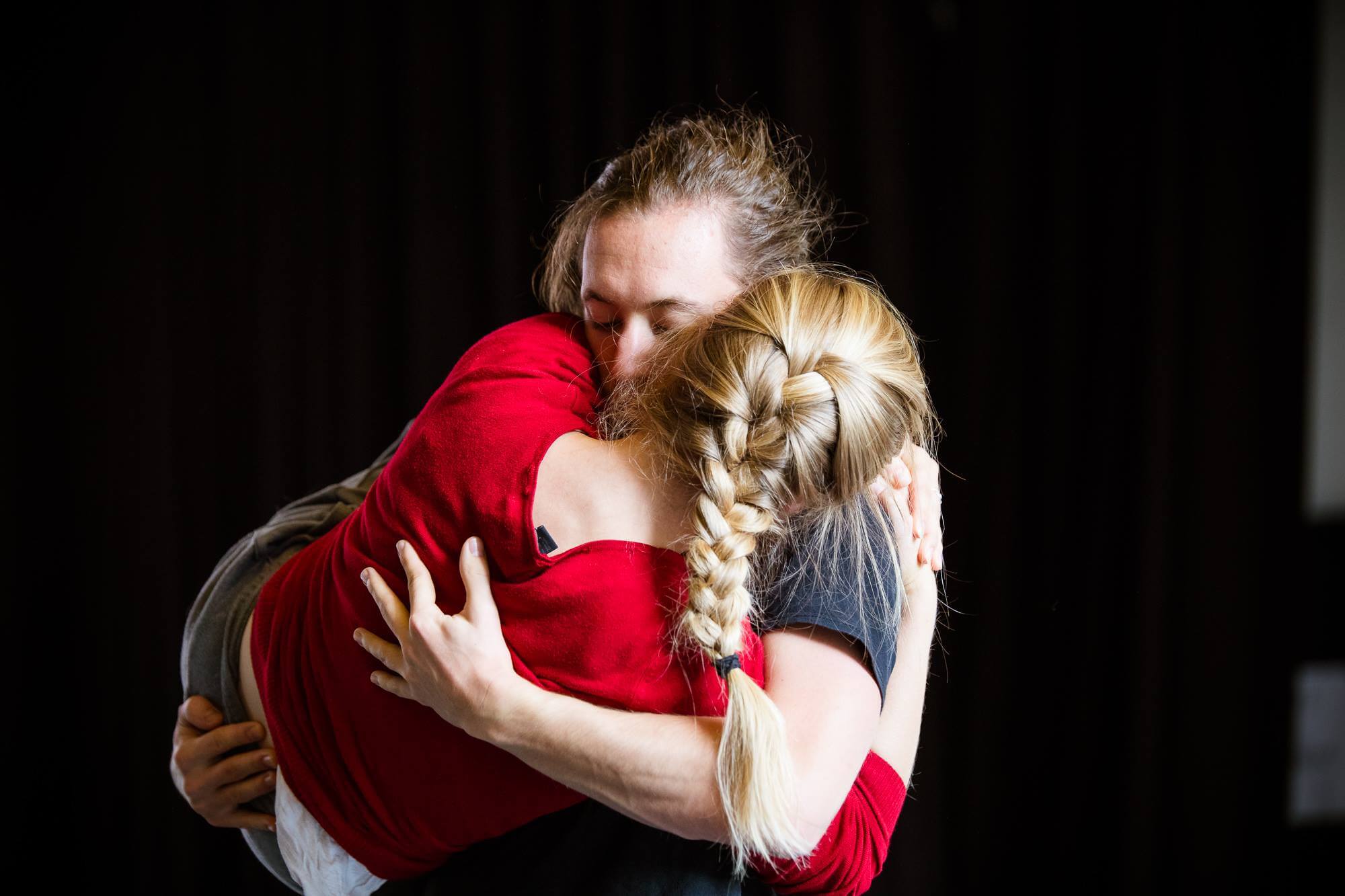 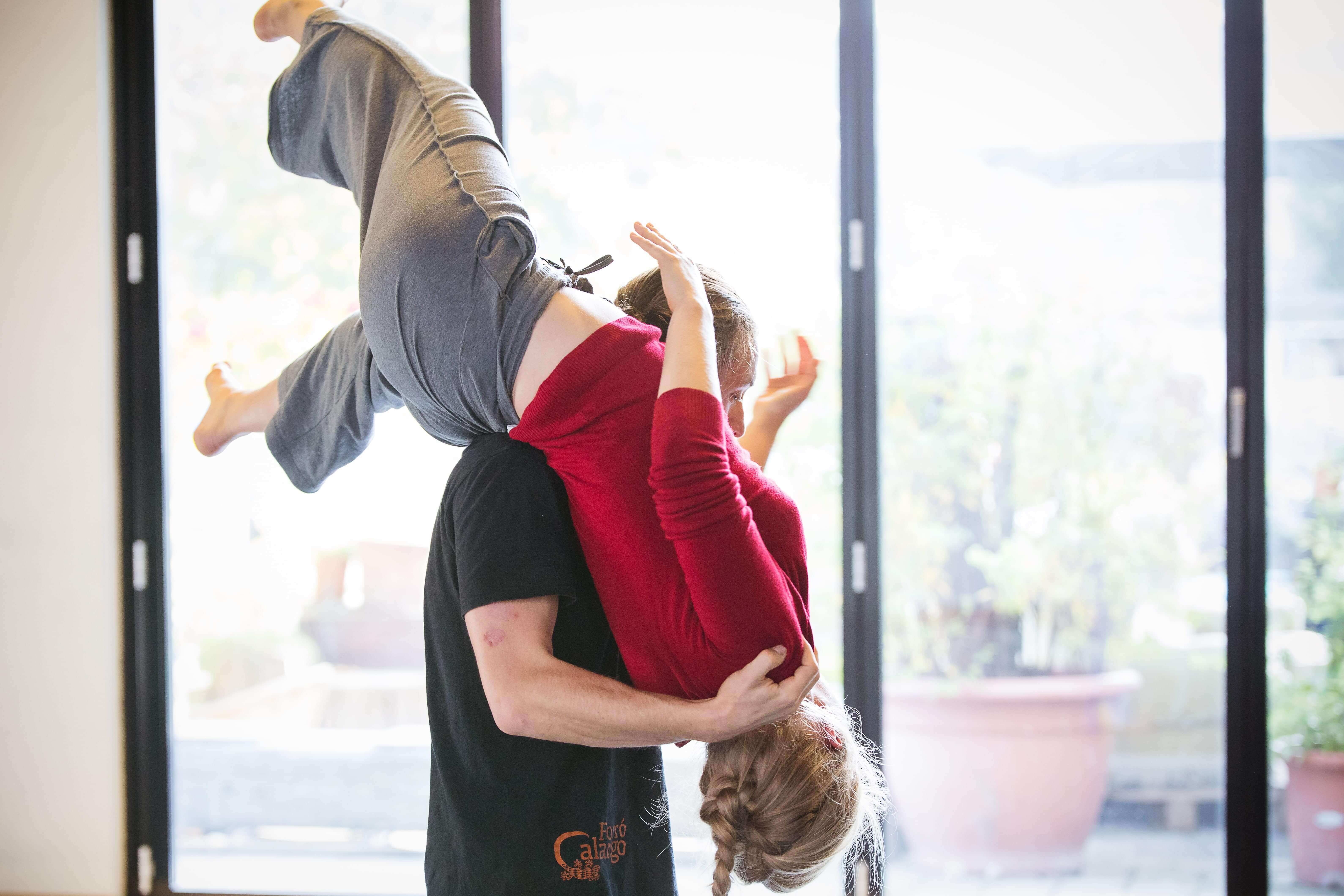 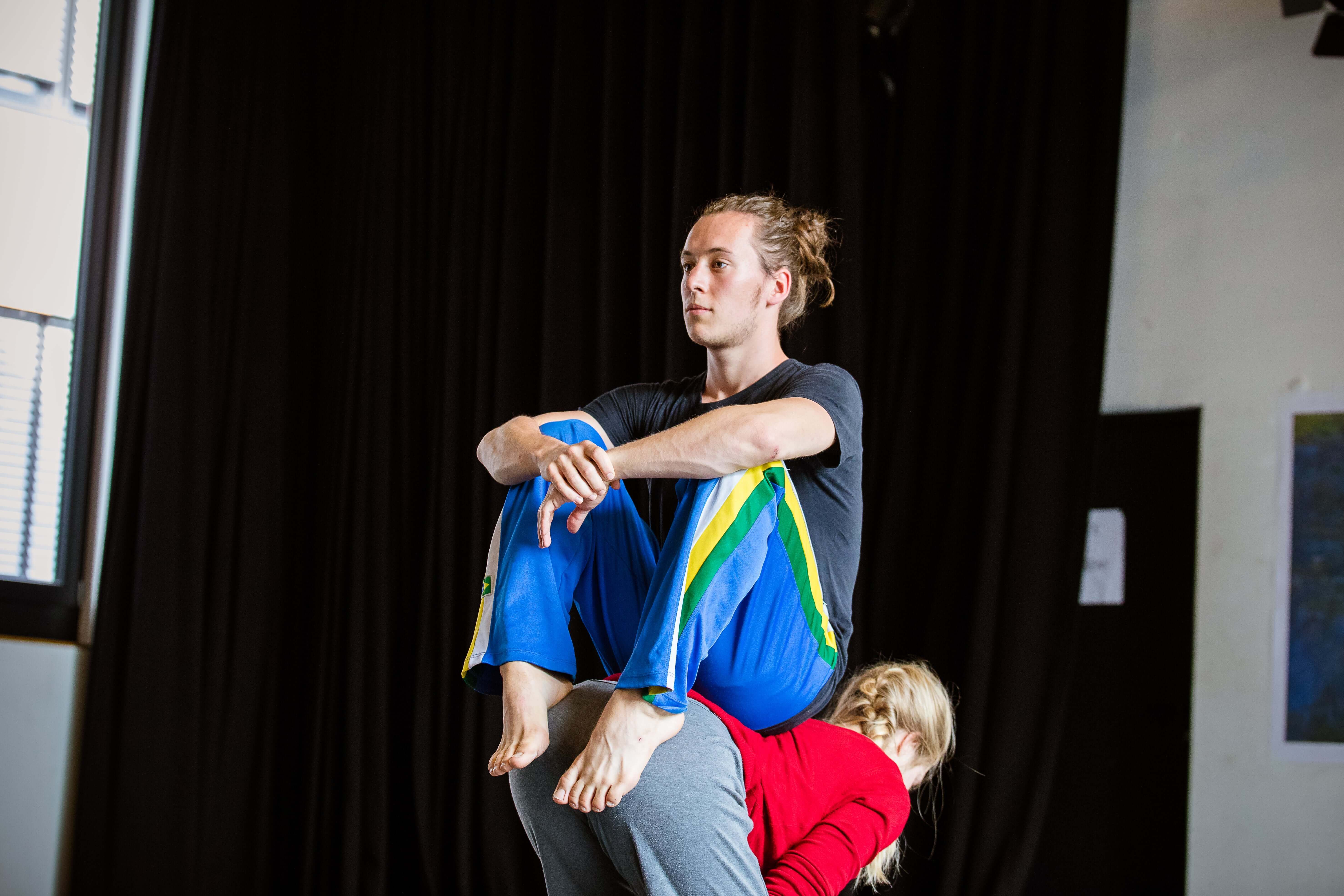 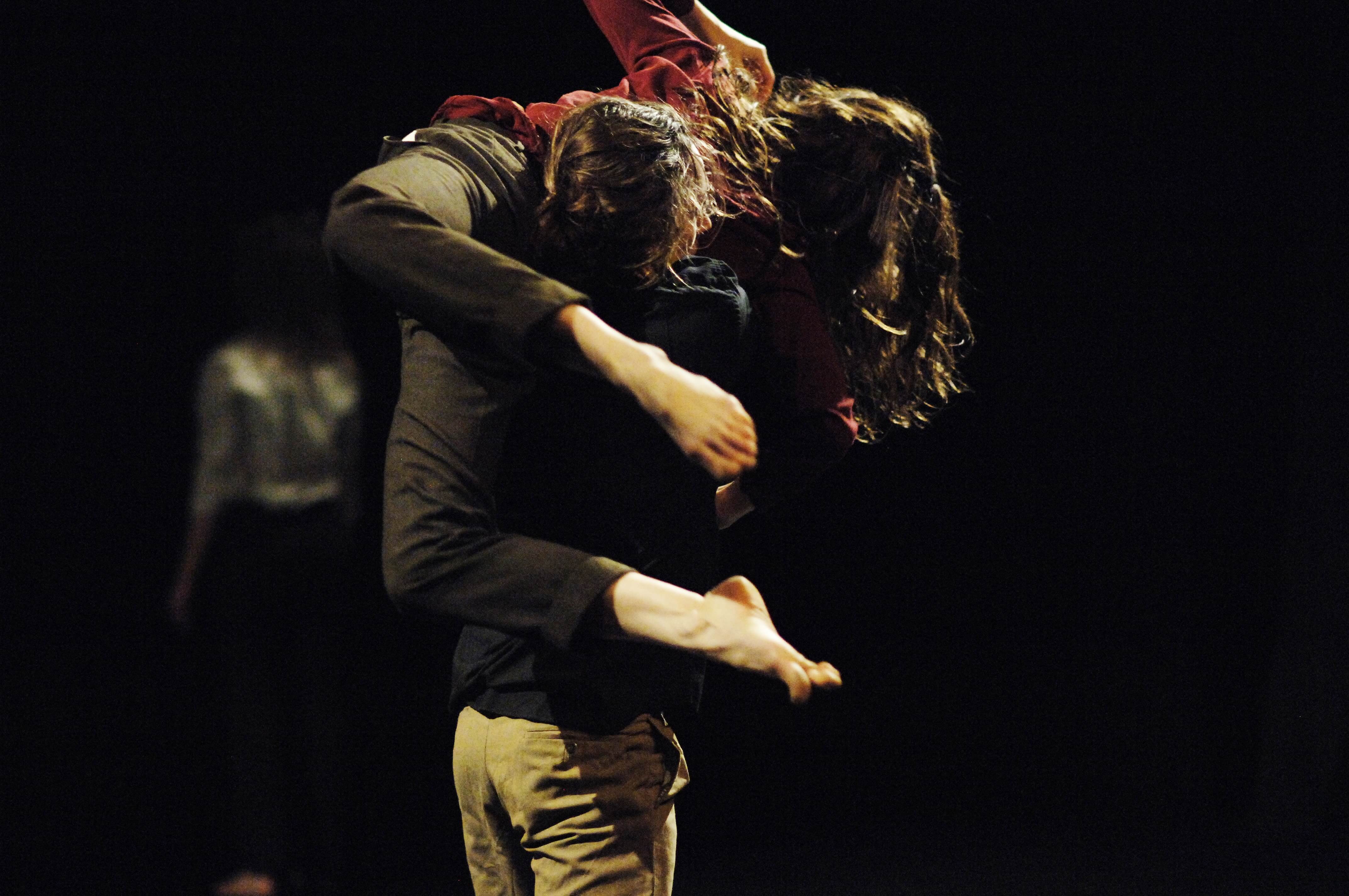 In a world of conflict, Zemiata seeks to bring us closer to our human nature; to our inner ritual. Zemiata investigates the significance of being a part of a ritual in today's society and interprets the social and emotional aspects evolving in a group of people, who shares the same faith and the same beliefs.
Zemiata gives us new perspectives on the global world we live in and embodies the ritual aspect of today's society.

The contemporary dance performance, Zemiata, is inspired by the different relationships that exist in a group of people during a common ritual (religious, traditional and/or spiritual) in our present day world.
We are interested in the social and emotional aspects, which will evolve between the people who share the same faith and the same beliefs. We explored and experimented together around the signification of being part of this ritual’s practice in society nowadays. We are interested in feeling and understanding what brings a person to being part of rituals and what binds her to her group.
Zemiata is a physical contemporary dance piece intertwining emotion, movement and expression which will make you travel inside different characters during a ritual’s practice.
We are interested in the different cultures and how these cultures can coexist together in a world more and more multicultural.
That is also why we are a team of four people coming from different countries and different cultures (Belgium, France, Italia, Russia).
This multiculturalism brought more inspiration and ideas during the creation process. 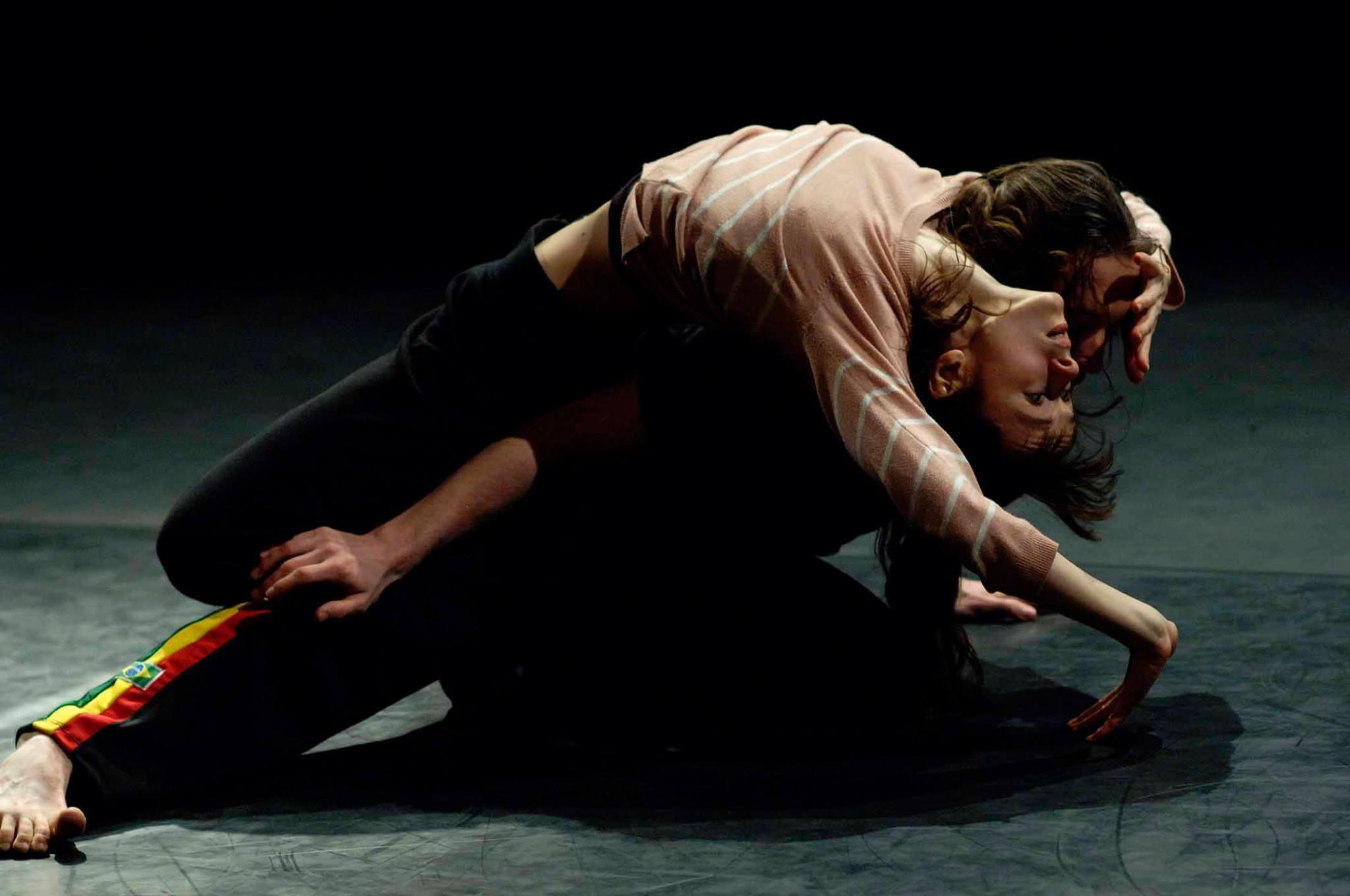 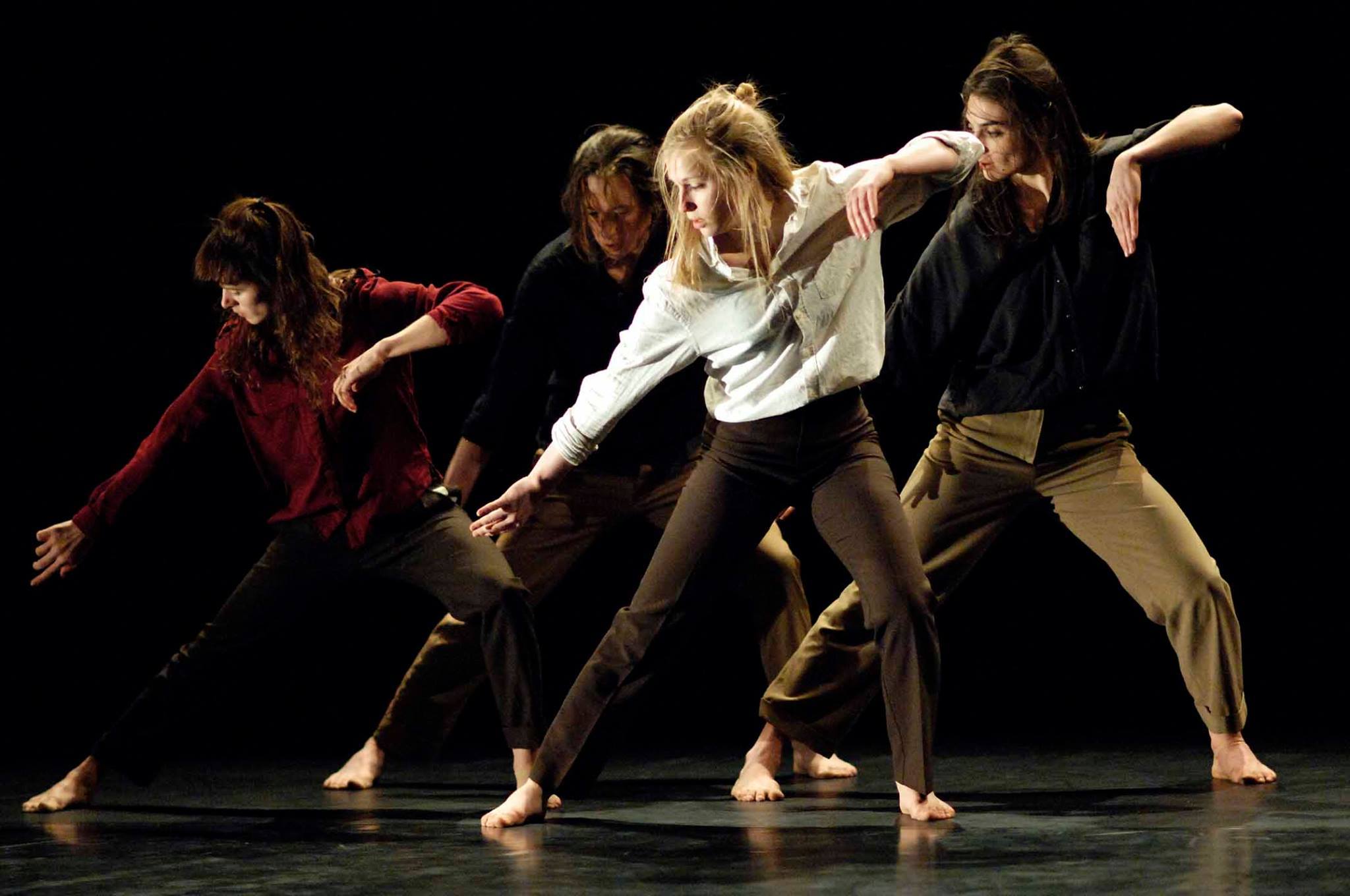 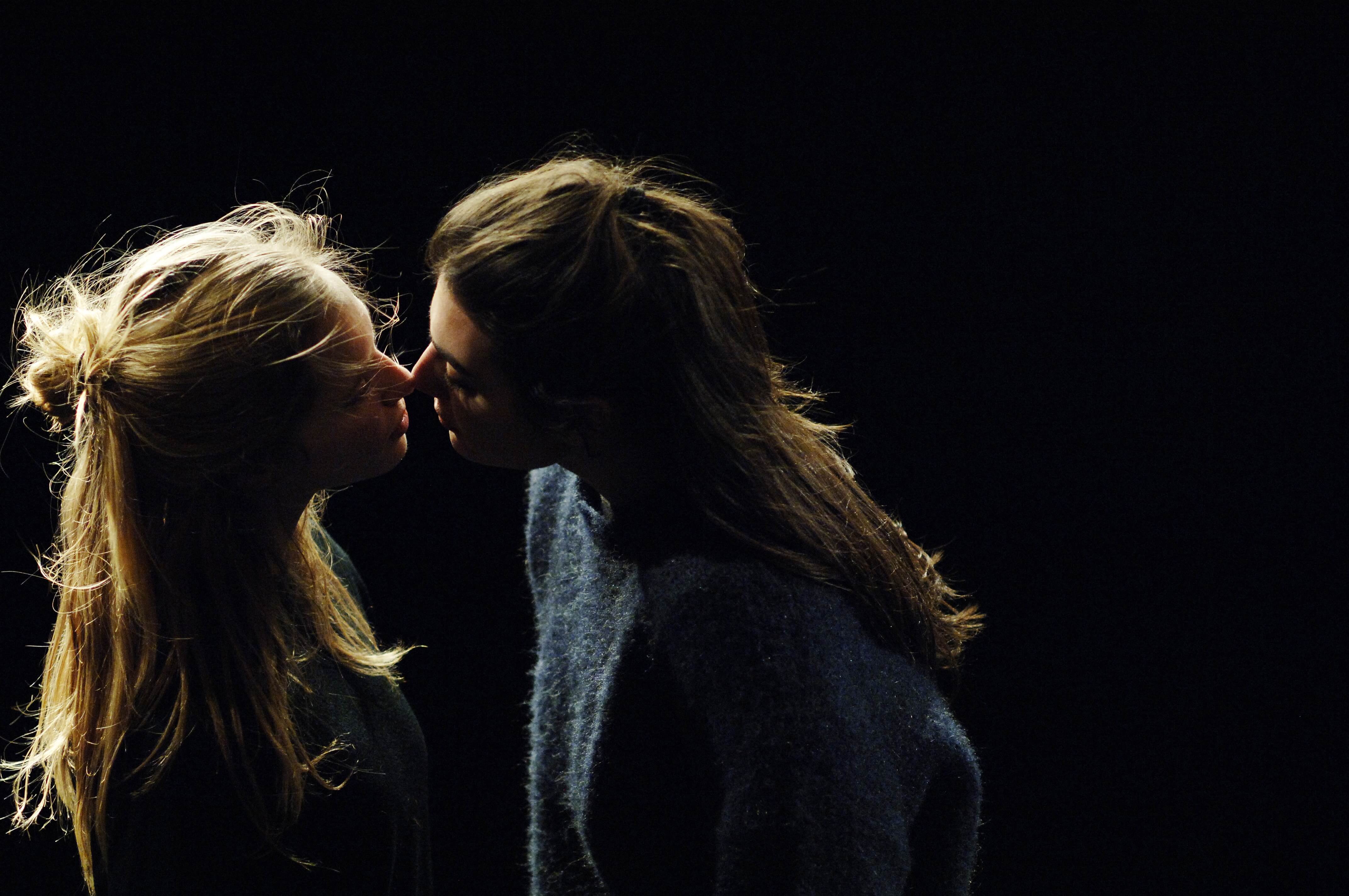 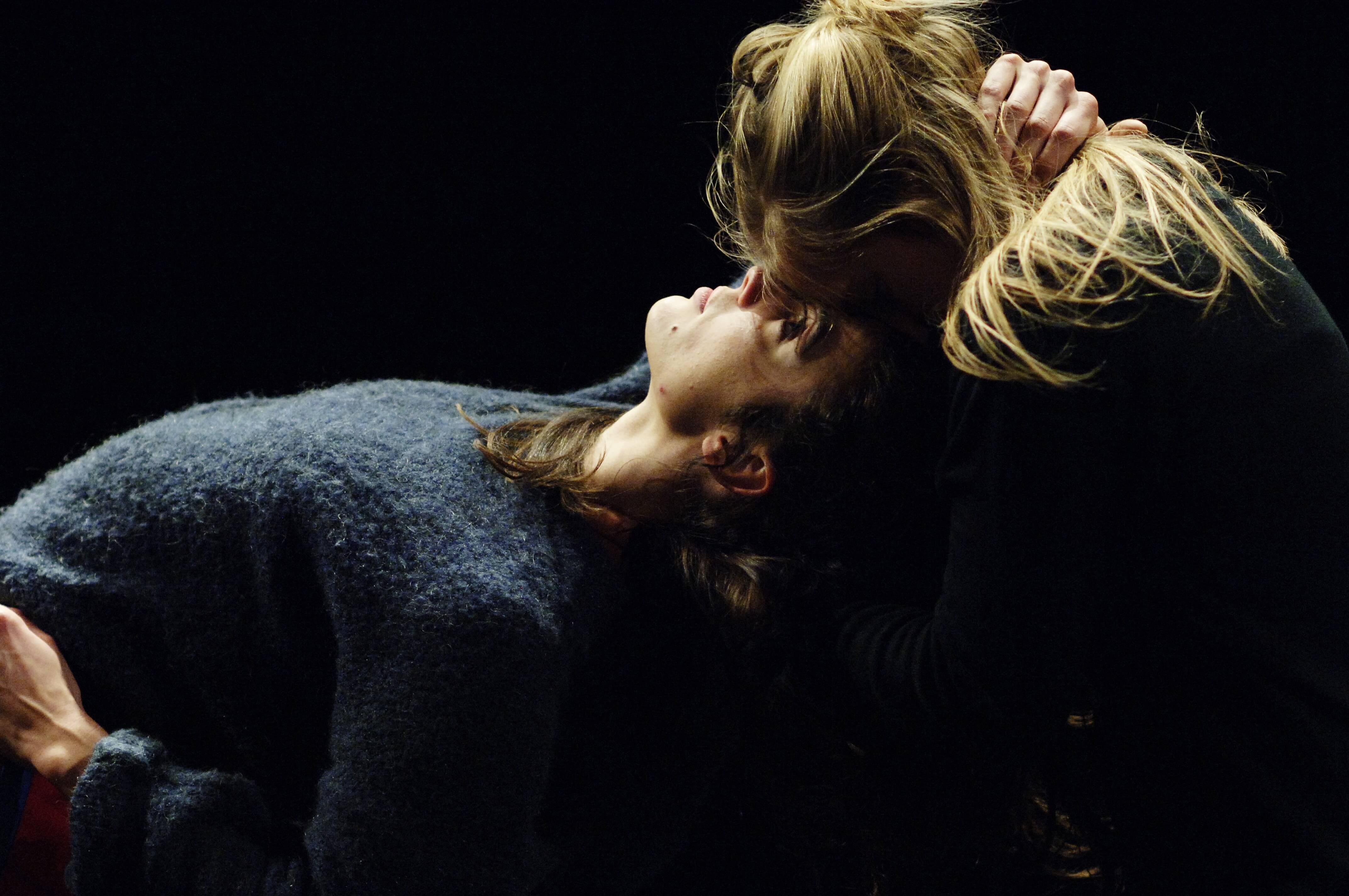 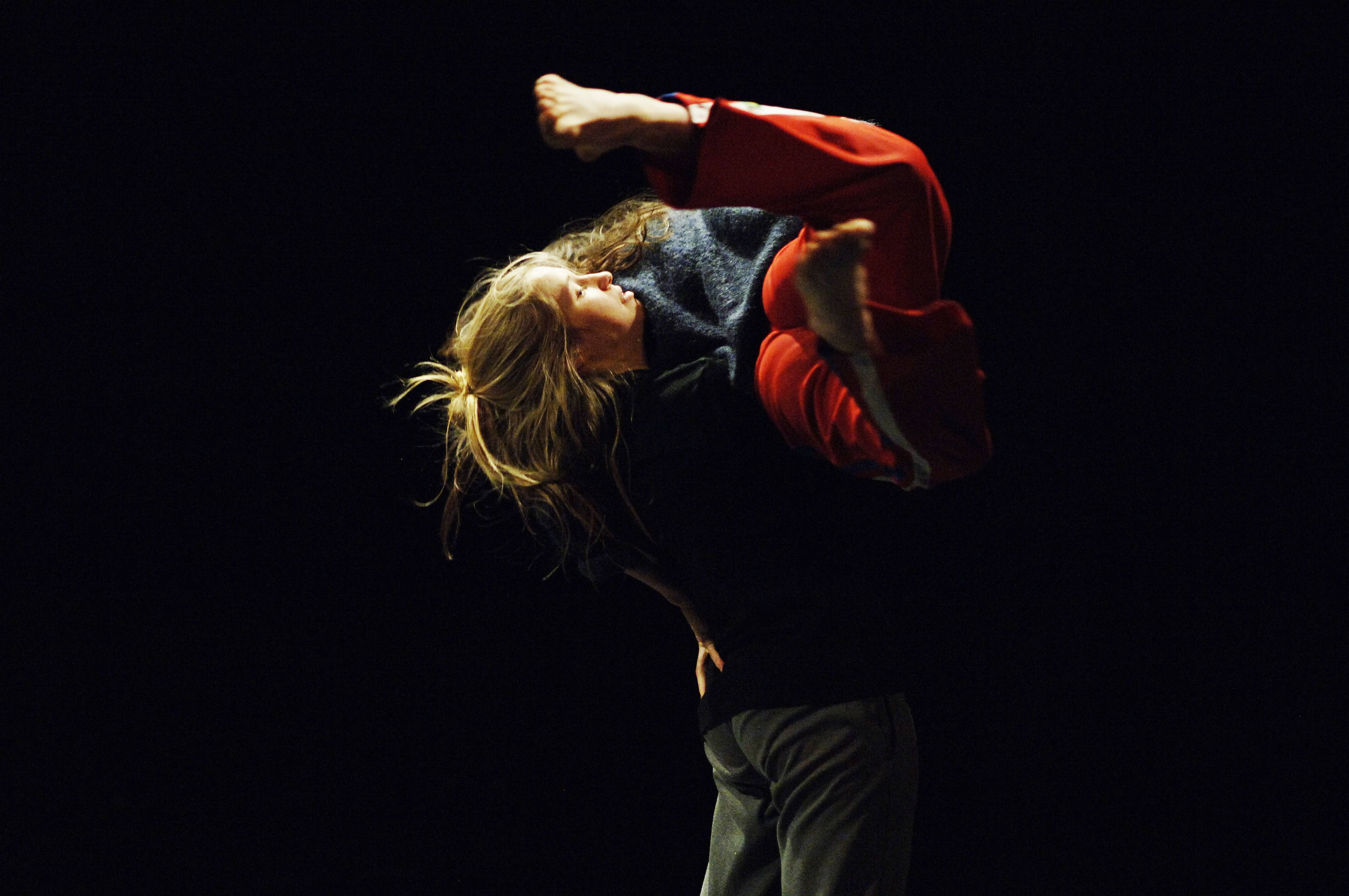 "Man migrates out of envy or need, for political or religious reasons, to discover the world, or to go back home. Migration follows a very different logic depending on the people and the regions of the world, but it has offered us, in its different forms, richer societies in their diversity.
"Moi, voyageur de rêve" aims, through the story of a man's journey, to reconcile us with the notion of migration. To show us the beauty that emerges through it and its beneficial aspects while paying tribute to a man, a grandfather, a Dedo.";

I am a grandson of a migrant. My grandfather, at the age of 18 left his country, Macedonia, to obtain what he couldn’t receive in his country. The possibility to choose his own path of life.

When he was a child, the country, formerly Yugoslavia, was in a trouble period and the war rose in a fragile country.
Misery and poverty became the result of this conflict.
My grandfather decided to leave, with only some pictures. During his journey, he passed through snowy mountains, forests, rivers, always during the night to not get caught or killed by patrols in function near the frontier. His transit in the camp made stronger his determination and will of a better life far away from war, pain and horror.

This solo is a tribute to my grandfather, my Dedo and to his journey.
I want to show a vision more personal, more human and emotional about migration. Many people do not feel attached to this subject. They don’t connect it to their own story. But we are, in a way, all coming from the migration and it is what makes the beauty of the human being. Sharing and exchanging culture with others.
Today migration, as it is described, is often negative. We do show and talk only about the bad side of migration.
With this solo, this story, which will be for me a journey through my heritage, I would like to show the beauty of the migration and allows people to see it’s beneficial aspect. 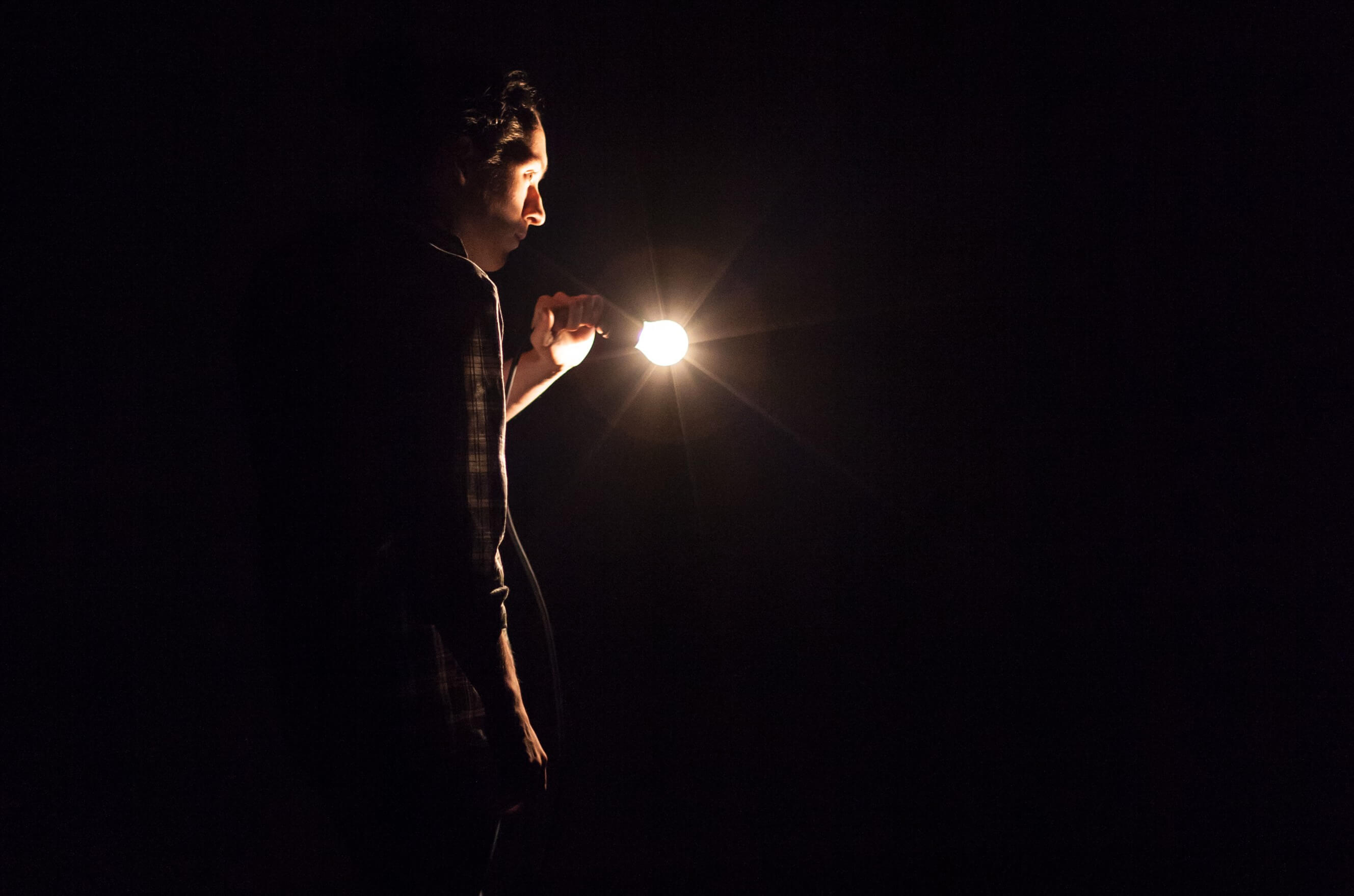 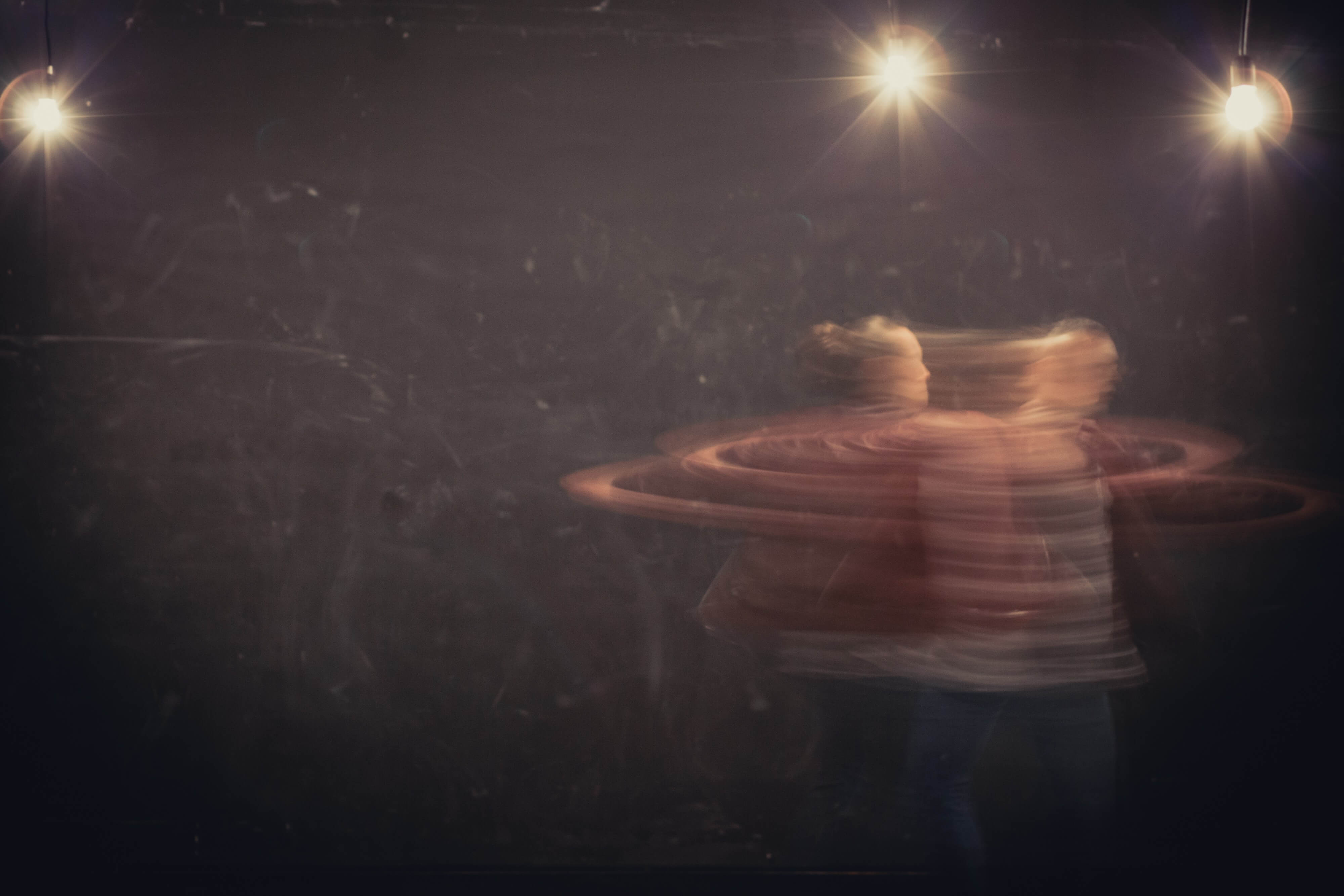 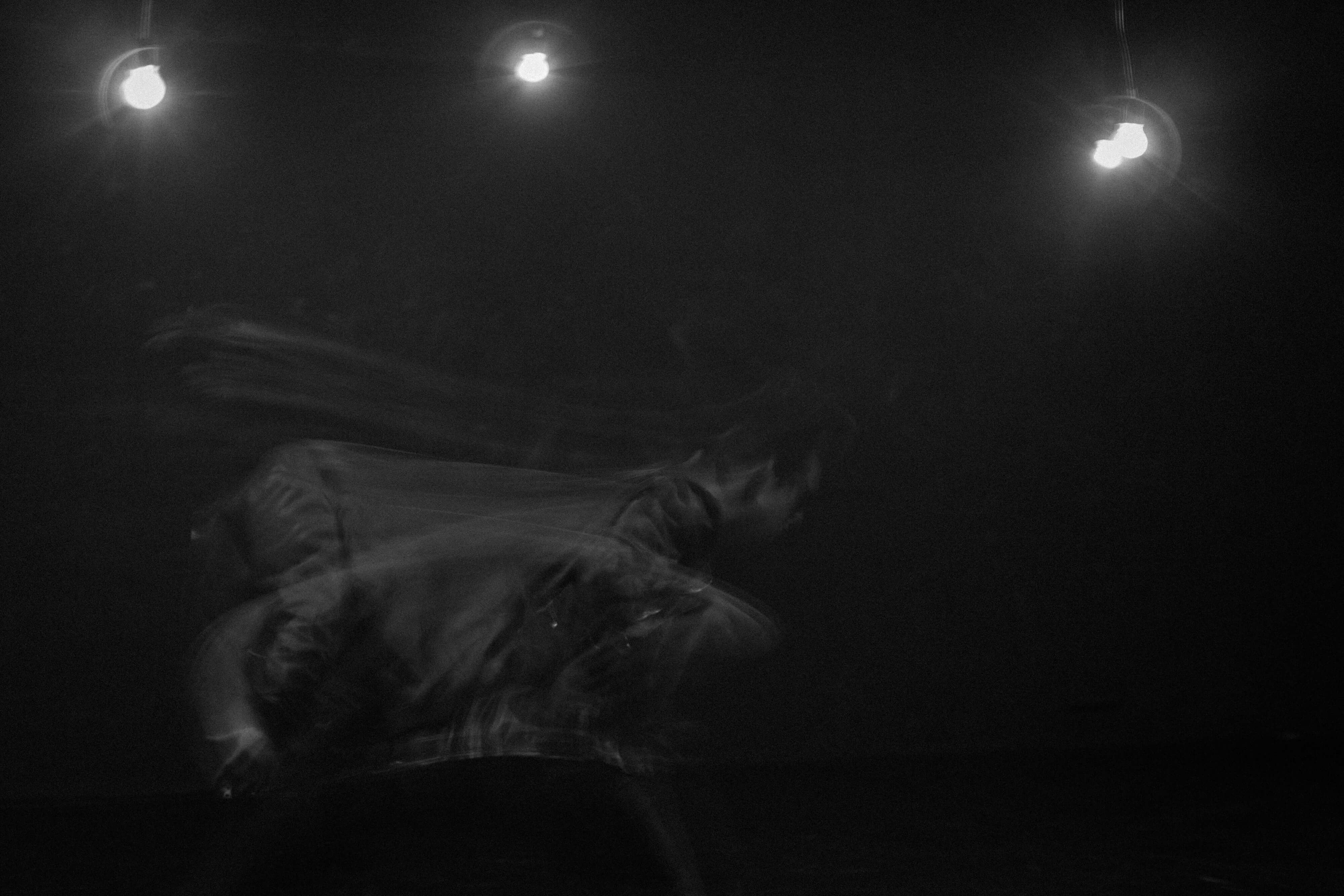 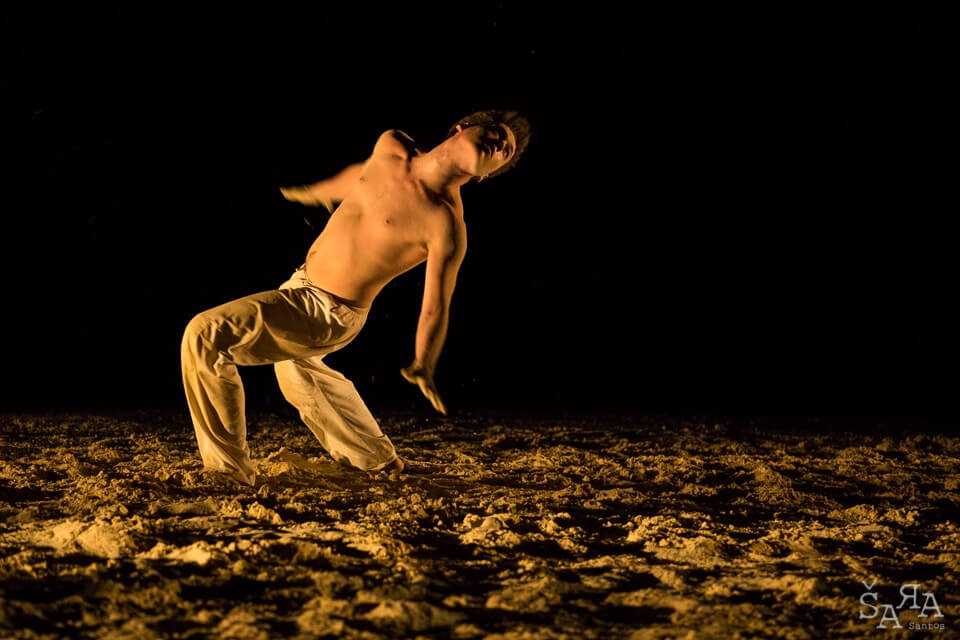 My main inspiration for this solo was sand, chosen for its textural qualities and the effect this can have on my movement quality.

For my research, I worked with two mains ideas: ‘the body made of sand’ and ‘moving like sand’ as the base of my work.Body Mind Centering informed my research, as I was interested in the relationship between the micro cellular system in our body and sand.
Some movies where we could see sand moving helped me to define a state of mind and by extension to explore a specific movement quality and to generate movement vocabulary.
The concept of moving like sand arrived later in the creation of my solo. It refers to a more physical aspect of the sand. I thought about the different textures (the sand of the desert, the beach, transformed in to glass, iced or even heated) and the elements that move it (waves of the sea and the wind). This second concept allowed me to explore deeper this quality of movement and to discover its nuances.

The concept of dehumanization of the human body and loneliness appeared in the creation process. The dehumanization of the human body helped me to find new ways to move and loneliness is always a part of my solo process. Here it helps to concentrate on my internal movement motivation. It means that in a way my solo gives the image of a human body devoid of humanity travelling aimlessly on the stage. 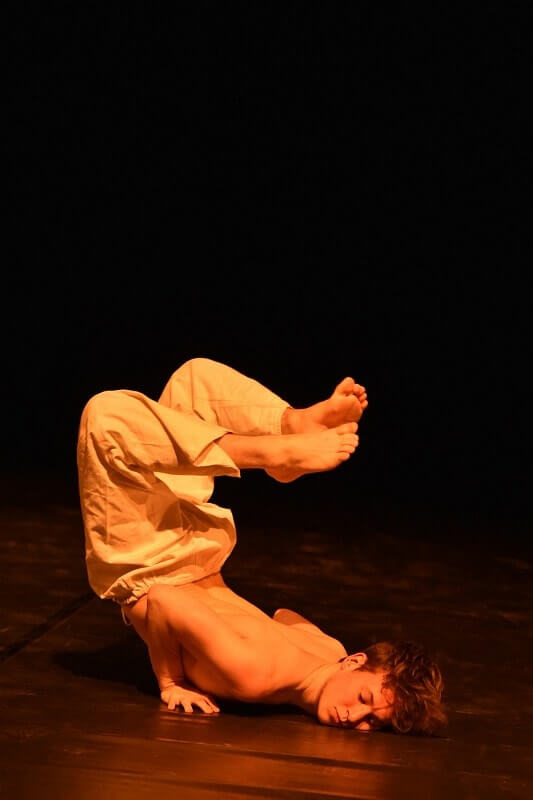 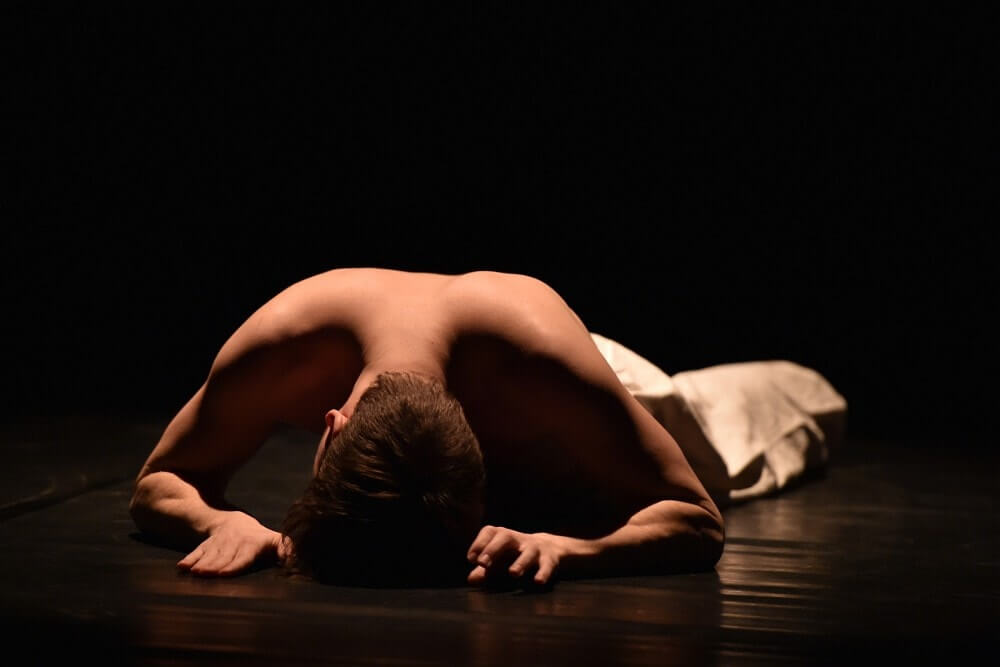 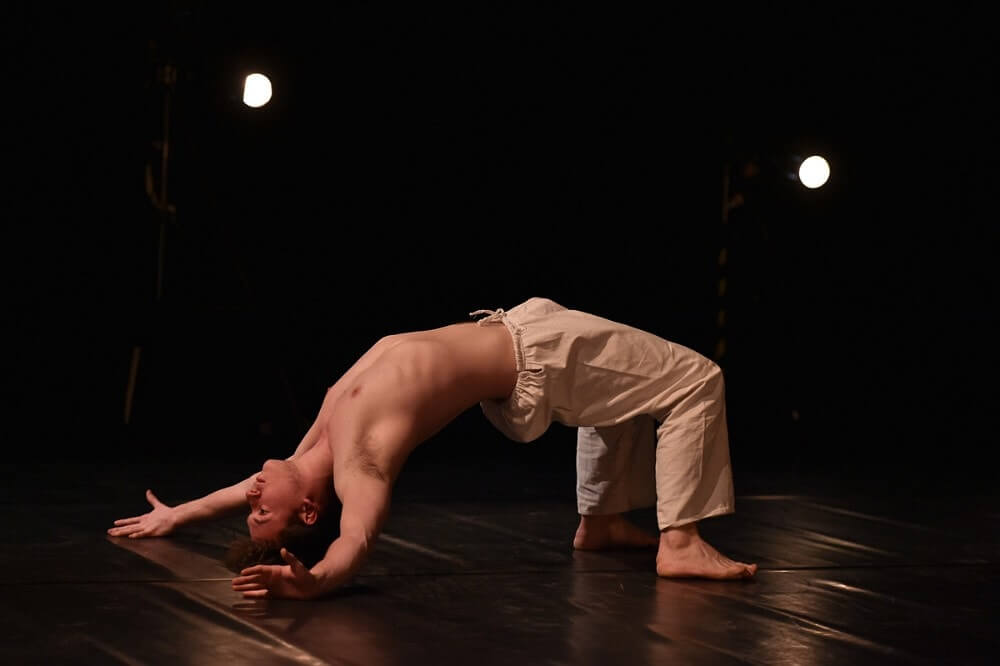 Born in Brussels in 1992, Youri De Gussem started hip hop dance at the age of 11 in a private school. Thereafter he learned contemporary and ballet dance at the Athénée Royal des Beaux Arts of Brussels. In 2010, he passed the audition and entered at the Royal Conservatory of Antwerp directed by Iris Bouche and he obtained his Bachelor in contemporary dance. In Antwerp, he had the chance to experiment several dances styles like Anne Teresa de Keersmaeker, Sidi Larbi Cherkaoui, Wim Vandekeybus, Pina Bausch and William Forsythe. He chose to finalize his formation at P.A.R.T.S., school founded and directed by Anne Teresa de Keersmaeker in 2013. 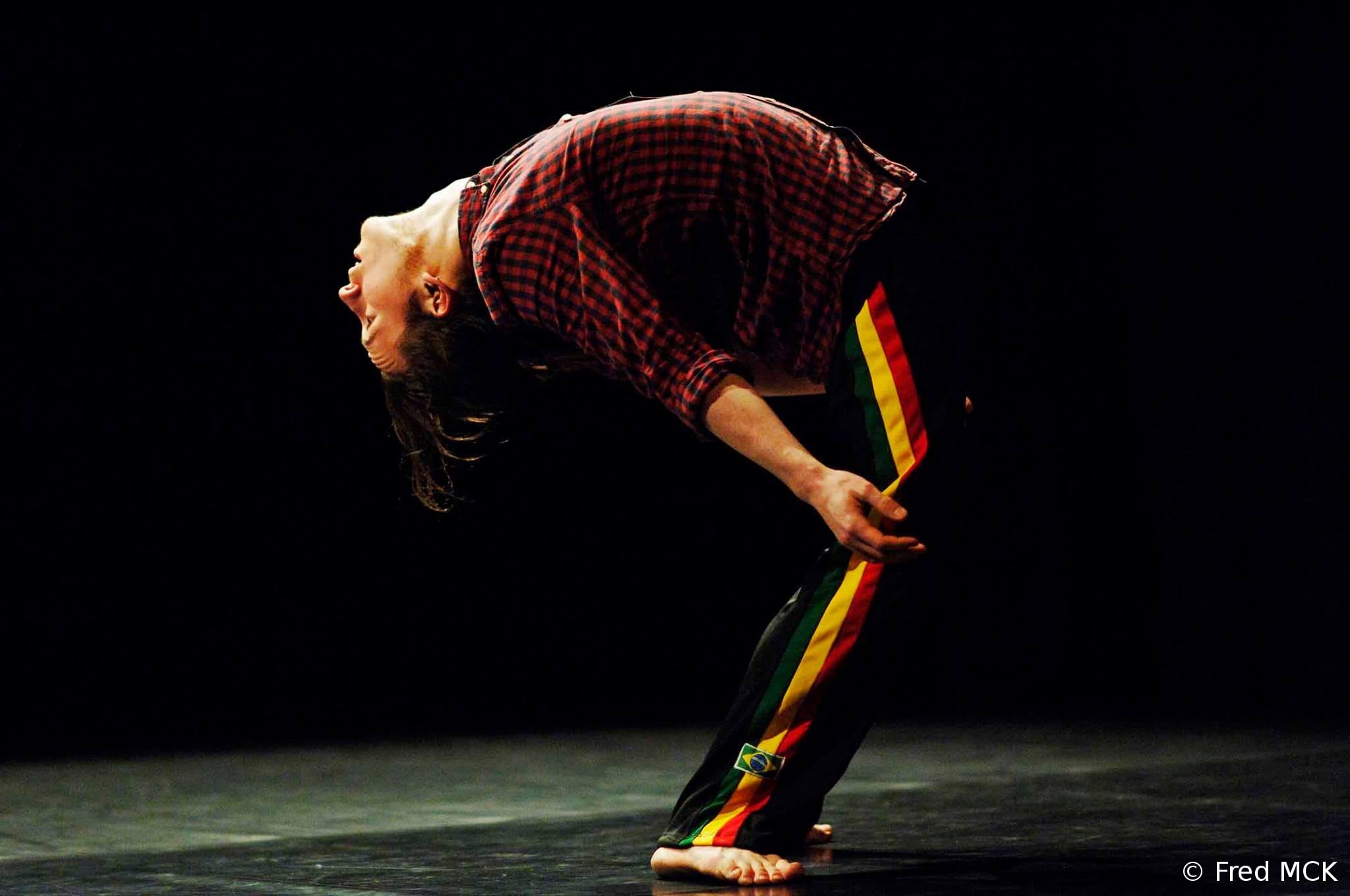 As a professional dancer, Youri worked with many choreographers. He took part in Body Design in Urban Spaces of Willie Dorner in Antwerp for the opening of the MAS museum. He played in Dodo Groot of Land Zonder Ei, theater piece directed by Dimitri Leue in HETPALEIS in Antwerp. He danced an extract of Babel by Sidi Larbi Cherkaoui at the Louvre museum in Paris under the direction of Damien Jalet and the company Eastman. He also worked in the Grand Théâtre of Luxembourg for the creation and the interpretation of Flock by Jean Guillaume Weis. Currently, he is working with the choreographer Ricardo Ambrozio, under the name of Untamed production (since 2014), with the company Jordi Vidal Lopez for his creation La Rencontre (2016-2017) as well as with the choreographer Sarah Baltzinger for the company Mirage for her new creation Fury (2017) also with the choreographer Marie Martinez (2018), and for the company Le Huit for the creation of A(ddi)ction (2018)

In parallel, he put all his attention to the development of his own artistic as well as the development of the company Zemiata in collaboration with the choreographer and dancer Julie Querre (FR). Some of his creations were part of several international festivals in Lisbon, Brussels, Antwerp, Stuttgart, Copenhagen, Arnhem and Corfu. His last creation Zemiata had his premiere in the belgian theater Cité Culture in Brussels in January 2017. He also works on the creation of a new solo, Moi, voyageur de rêve (2018).

Julie Querre is a professional contemporary dancer who first studied at the National Conservatory of Bordeaux where she received a diploma of choreographic studies with high honors, and after at the National Choreographic Center of Roubaix. Finally, she graduated in Belgium at the Royal Conservatory of Antwerp (Artesis) with a bachelor in contemporary dance. 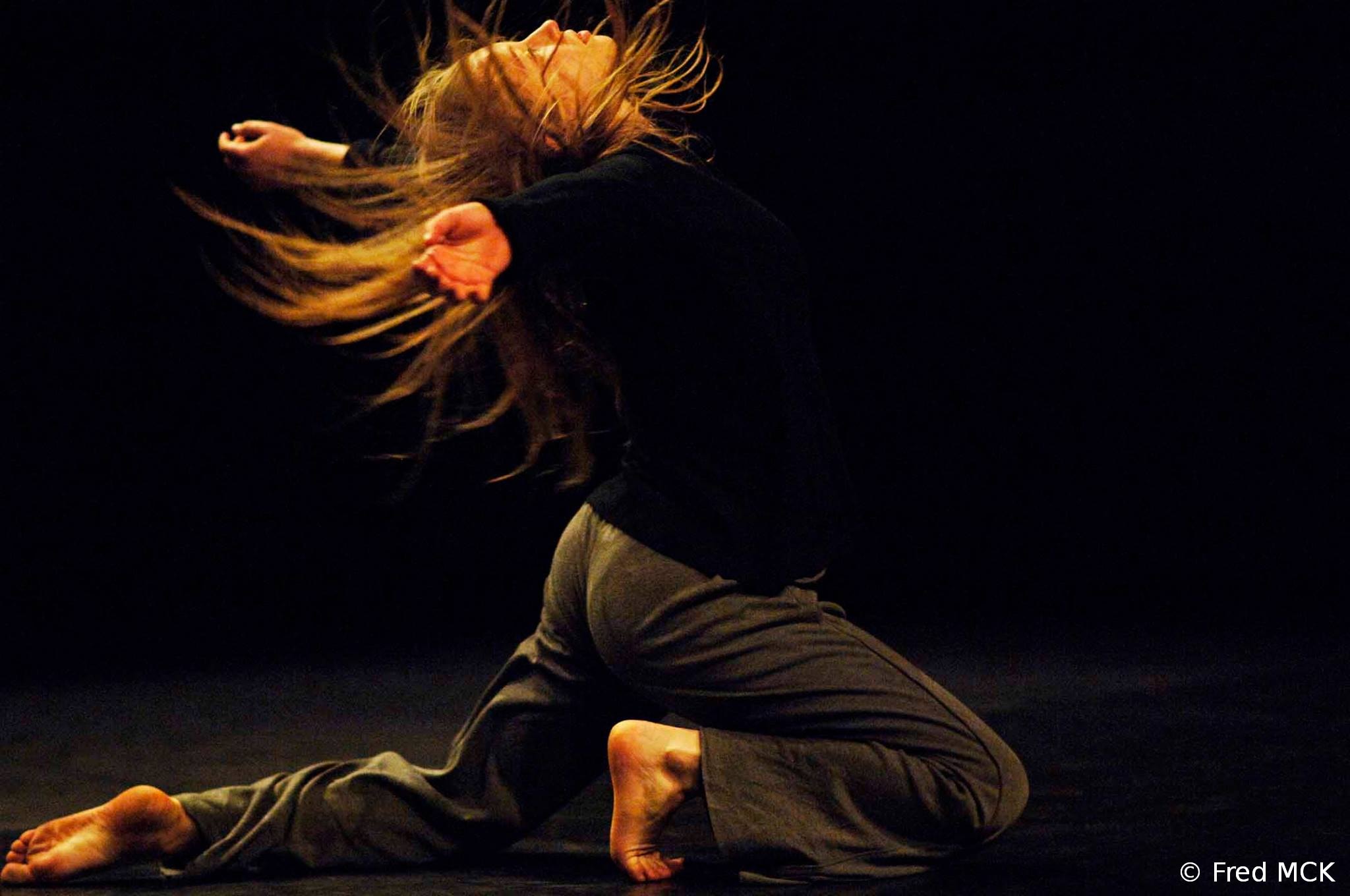 For the last few years, she has worked with different choreographers and artists like, for example, Jelena Kostic, Koen de Preter, Martha!tentatief company, Otto Pichler and Barjo&Cie as a dancer. In 2017, she created the company Zemiata with Youri De Gussem whose the first dance piece tours in several european countries like Greece, France, Danmark and Holland.

Feel free to contact us with an email contact@compagnie-zemiata.com

You can support us with a donation.